Scientists say these new worlds are the right size and distance from their parent star, so that you might expect to find liquid water on their surface. With water comes the possibility bacteria and Alien life forms.

“They are the best candidates found to date for habitable planets,” stated Bill Borucki, who leads the team working on the US space agency Nasa’s orbiting Kepler telescope.

The prolific observatory has so far confirmed the existence of more than 100 new worlds beyond our Solar System since its launch in 2009. The two now being highlighted were actually found in a group of five planets circling a star that is slightly smaller, cooler and older than our own Sun. Called Kepler-62, this star is located in the Constellation Lyra.

They are what one might term “super-Earths” because their dimensions are somewhat larger than our home planet – about one-and-a-half-times the Earth’s diameter. Nonetheless, their size, the researchers say, still suggests that they are either rocky, like Earth, or composed mostly of ice. Certainly, they would appear to be too small to be gaseous worlds, like a Neptune or a Jupiter.

Given the right kind of atmosphere, it is therefore reasonable to speculate, says the team, that they might be able to sustain water in a liquid state – a generally accepted precondition for life.

“Statements about a planet’s habitability always depend on assumptions,” said Lisa Kaltenegger, an expert on the likely atmospheres of “exoplanets” and a member of the discovery group. 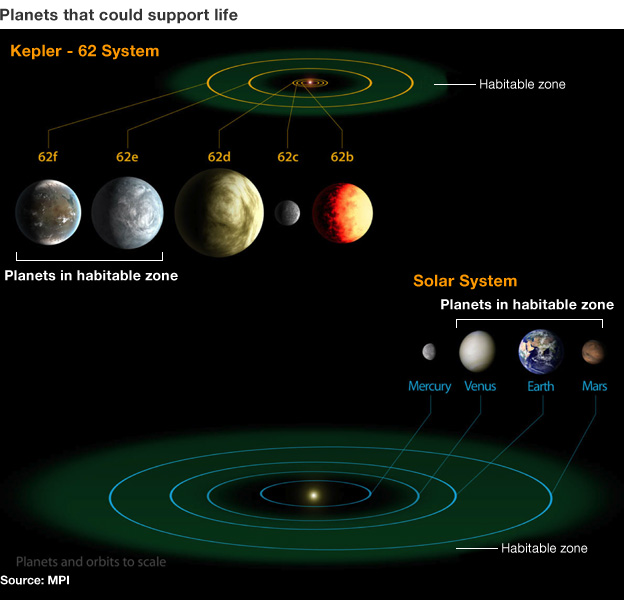 Dr Suzanne Aigrain is a lecturer in astrophysics at the University of Oxford.

She said ground-based experiments and space missions planned in the next few years would give more detailed information on distant planets like those announced by the Kepler team. Astronomers would like to pin down the masses of the planets (information difficult to acquire with Kepler), as well as getting that data on atmospheric composition.

Dr Aigrain told BBC News: “What we do next is we try to find more systems like these; we try to measure the frequency of these systems; and we try to characterise individual systems and individual planets in more detail.

“That involves measuring their masses and their radii, and if possible getting an idea of what’s in their atmospheres. But this is a very challenging task.”Kepler meanwhile will just keep counting planets beyond our Solar System.

How many planets has Kepler found so far?

NASA’s Kepler Mission has discovered an astonishing 461 new Planets so far (and counting). Here is a visualisation of their sizes

Posted on January 3rd, 2013
Everyone who has ever been on holiday to Planet Kepler 22-b or our surrounding planets and moons will know that there isn’t a better place to visit then our welcoming atmosphere and great climate. However for those of you interested in the battles that occurred “a long time ago, in a galaxy far, far away” you may also be interested in visiting the following destinations…

This 3-D image from NASA’s Curiosity was taken from the rover’s Bradbury Landing site inside Gale Crater, Mars, using the left and right eyes of its Navigation camera. Between the rover on the right, and its shadow on the left, looms the rover’s eventual target: Mount Sharp. The mountain’s highest peak is not visible to the rover from the landing site.

NASA’s most advanced Mars Rover lands on the Red Planet

NASA’s most advanced Mars rover Curiosity has landed on the Red Planet. The one-ton rover, hanging by ropes from a rocket backpack, touched down onto Mars Sunday to end a 36-week flight and begin a two-year investigation.

“Today, the wheels of Curiosity have begun to blaze the trail for human footprints on Mars.  Curiosity, the most sophisticated rover ever built, is now on the surface of the Red Planet, where it will seek to answer age-old questions about whether life ever existed on Mars — or if the planet can sustain life in the future,” said NASA Administrator Charles Bolden. ”This is an amazing achievement, made possible by a team of scientists and engineers from around the world and led by the extraordinary men and women of NASA and our Jet Propulsion Laboratory. President Obama has laid out a bold vision for sending humans to Mars in the mid-2030′s, and today’s landing marks a significant step toward achieving this goal.”

Curiosity landed at 10:32 p.m. Aug. 5, PDT, (1:32 a.m. EDT Aug. 6) near the foot of a mountain three miles tall and 96 miles in diameter inside Gale Crater. During a nearly two-year prime mission, the rover will investigate whether the region ever offered conditions favorable for microbial life.

Video footage from this morning can be viewed here

Slovakian artist Roman Ondak’s interactive installation titled Measuring the Universe started as a blank white room and evolved into a room with a strip of celestial black marks all around the gallery space at Tate St Ives. Through the participation of over 90,000 visitors measuring themselves and marking it on the walls, spectators get a visual sense of the space each of us takes up in this vast universe. It’s a reflection of physical occupied space as well as interconnectivity. Each person serves as a star in a network of celestial bodies or constellations. It’s also interesting the way this project has organically evolved into a sparse series of black marks on white walls that resemble a galaxy whose monochromatic scheme has been reversed.

via [My Eclectic Depiction of Life]

It’s a big day tomorrow for Earthlings as they await the landing of NASA’s space rover ‘Curiosity’. Curiosity will look for “the ingredients of life”, the essential molecules and elements that go into living things.

The landing will mark the beginning of a two-year prime mission to investigate Mars and is due to land on Monday, August 6 at 1:31 a.m / EDT 6:30am (BST)

There are four ways to watch the Mars Landing

…and don’t let those martians tell you anything different!

The image below highlights all of the planets found by the Kepler telescope thus far. Take note of their size relevant to Planet Earth: